Four Thousand Weeks – that’s the amount of time you get if you live to 80. Not only does it feel like an impossibly small amount of time, it also speeds up the older you get.

I really enjoyed this book by Oliver Burkeman. It’s less of a self-help book, more of a meditation on time and our relationship to it. It reminded me a bit of another all-time favourite of mine, How To Do Nothing. 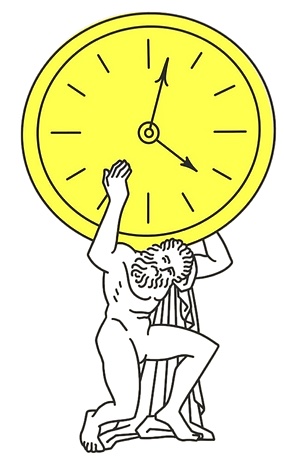 Most productivity frameworks are about trying to control your time and squeeze more activity into your finite day. You end up spending all your time “clearing the decks” of urgent but unimportant tasks, and never actually get around to the really important stuff. Day-to-day life becomes an endless to-do list that we have to get through efficiently on the pathway to a point where our real life can begin.

Burkeman suggests there is always going to be too much to do and there will never be enough time. We shouldn’t try to be more productive, but instead embrace our finitude and accept that there’s a whole lot of stuff that we’re just never going to do.

The day will never arrive when you finally have everything under control… The more you confront the facts of finitude instead — and work with them, rather than against them — the more productive, meaningful and joyful life becomes.

This necessarily requires some sacrifice. It’s not just about saying “no” to the things you didn’t really want to do anyway – it’s also about giving up some things that you really want to do.

There are hard choices to be made: which balls to let drop, which people to disappoint, which cherished ambitions to abandon, which roles to fail at.

Instead of clearing the decks, declining to clear the decks, focusing instead on what’s truly of greatest consequence while tolerating the discomfort of knowing that, as you do so, the decks will be filling up further, with emails and errands and or to-dos, many of which you may never get round to at all.

The key is not more productivity but conscious choices and acceptance – the joy of missing out. We have to accept that this is a sacrifice, that we will feel discomfort, that the to do list will always be infinite…

The core challenge of managing our limited time isn’t about how to get everything done but how to decide most wisely what not to do, and how to feel at peace about not doing it.

Personally, I feel like I’m always living in the future: either anxiously worrying about what’s going to happen or excitedly/impatiently imagining various future scenarios in great detail. I really agree with Burkeman’s arguments about letting go of our obsession with the future and paying attention to the current moment, but in practice it’s obviously much harder.

You can’t know that things will turn out all right. The struggle for certainty is an intrinsically hopeless one, which means you have permission to stop engaging in it.

One bit that really resonated with me was the part about time as a “network good”: our time is only valuable when it’s in sync with the people we care about. This necessarily means relinquishing control over our own time, in order to fall into step with others. Digital nomadism (I hate that term) optimises for extreme personal sovereignty over time, at the expense of being connected to others – which is ultimately what makes life meaningful.

To be deeply rooted in a particular community or place, you have to stop moving around. These kinds of meaningful and singular accomplishments just take the time that they take.

The book gets more practical in the appendix, which summarises the main points and suggests some actual things you can do day-to-day, like: