I’m currently in northern Wales, doing a lot of walking and also reading Arts of Living on a Damaged Planet.

It’s a collection of essays about geology and biology, shared histories and unstable futures, nature and the Anthropocene, featuring many of my favourite writers: Anna Tsing, Donna Harraway, Ursula K Le Guin. It’s split in two halves – Ghosts and Monsters:

Ghosts and monsters are two points of departure for characters, agencies and stories that challenge the double conceit of modern Man. Against the fable of Progress, ghosts guide us through haunted lives and landscapes. Against the conceit of the Individual, monsters highlight symbiosis, the enfolding of bodies within bodies in evolution and in every ecological niche. In dialectical fashion, ghosts and monsters unsettle anthropos from its presumed centre stage in the Anthoropocene by highlighting the webs and histories from which all life emerges. 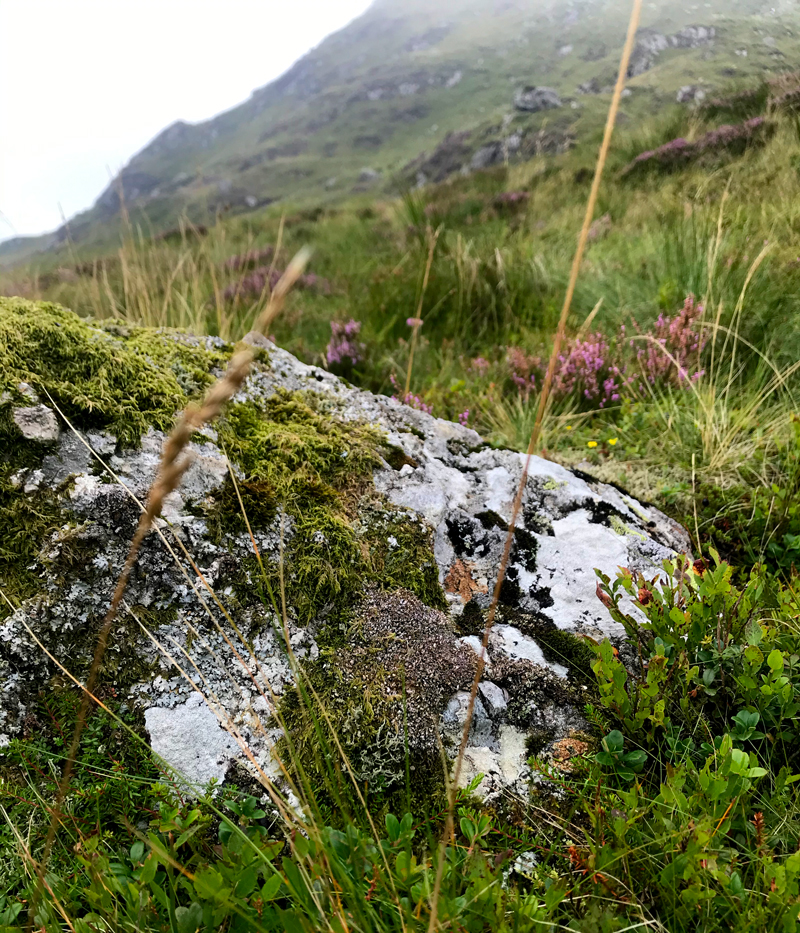 One of the key thinkers who is mentioned in the book is Lynn Margulis, who “opposed competition-oriented views of evolution, stressing the importance of symbiotic or cooperative relationships between species”. (She also developed the Gaia Theory with James Lovelock.)

Her theories on cooperative evolution, now widely accepted in the scientific community, challenge common ideas about nature and individualism. Yet the dominant cultural narrative of the Anthropocene is still one of competition, human exceptionalism and linear progress.

Many of the essays describe multispecies entanglements and symbiotic relationships across every scale, from cells to landscapes. The book is all about thinking about complex meshes and entanglements rather than simplified, linear, one-way hierarchies.

By highlighting examples of symbosis and collaborative survival in nature, and pointing to the fallacy of seeing humans as apart from nature, it points towards new ways of thinking about how we might live together.

I particularly loved the essay Shimmer by Deborah Bird Rose, an anthropologist whose work focuses on multispecies communities living through climate change, based on decades of fieldwork with Indigenous Australians.

She introduces the Aboriginal concept of bir’yun – which translates to “brilliance” or “shimmering”, the ancestral power of life. It is a concept that seeps into all aspects of life, and doesn’t distinguish between nature or culture. One example she uses to describe it is the overlaying different temporal patterns in music and dance; another is in the pulse between wet and dry seasons, as the landscape moves from dullness to brilliance and back again.

Bir’yun shows us that the world is not composed of gears and cogs but of multifaceted, multispecies relations and pulses. To act as if the world beyond humans is composed of “things” for human use is a catastrophic assault on the diversity, complexity, abundance and beauty of life.

I’m reminded of much of Le Guin’s writing, especially The Carrier Bag Theory of Fiction, and how we need to write new stories of collaborative survival, against the fable of Progress and the conceit of the Individual.

A major challenge is how to think geological, biological, chemical and cultural activity together, as a network of interactions with shared histories and unstable futures. There is something mythlike in this task: we consider anew the living and the dead; the ability to speak with invisible and cosmic beings; and the possibility of the end of the world.