This is a rough summary of what I remember talking about at the Dissenting Ephemera event last December.

I put my talk together somewhat last minute. As I was digging through old folders looking for what I wanted to present, I came across an illustration by Richard Giblett, which I’d collected at some point while researching for the Pages Magazine website back in 2014.

I realised it was the same image that printed while playing around with the riso printer at La Foresta in Rovereto in late 2019. It must have come up while I was searching Are.na for images of rhizomes, and I didn’t realise at the time that I’d seen it before. 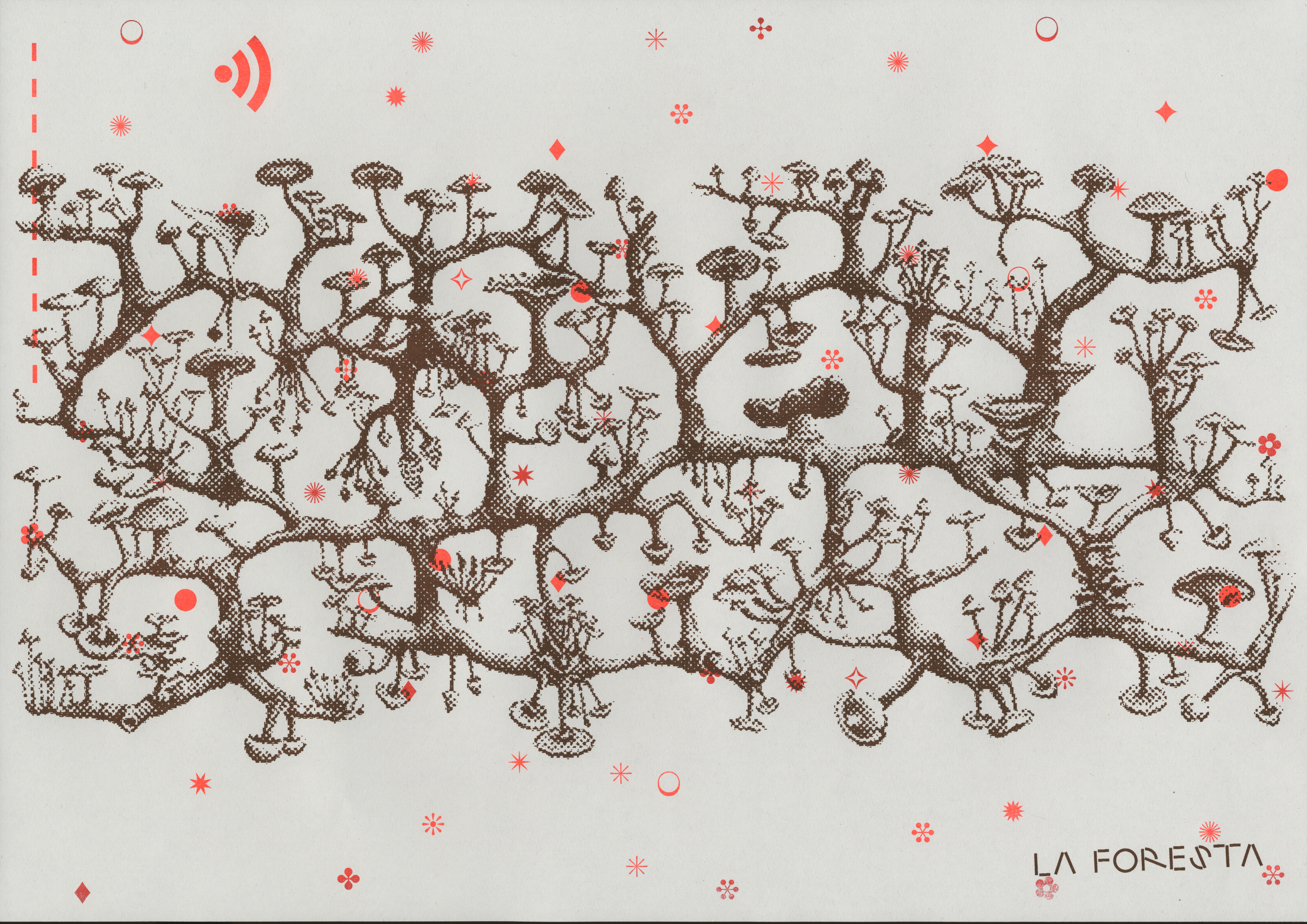 This is what I love about archiving as a process: I’m continuously collecting, grouping and making connections between things, but most of the time it’s intuitive rather than conscious. Over time, the rhizomatic archive grows in unexpected ways and patterns start to emerge. I like that this growth is a collective endeavour: the archive constantly being reshaped and revisited by its users.

For this talk, I spoke about a couple of digital archive projects I’ve worked on over the years, looking for the threads that begin to emerge between them.

I started working on Pages Magazine when I was at LUST in 2014. Pages is a magazine published in Farsi and English, covering topics like art, culture, architecture and new media.

We worked in collaboration with Pages’ editors to explore the idea of a permeable archive: one that is in constant flux, shaped by its contributors, shifting contexts and current events. 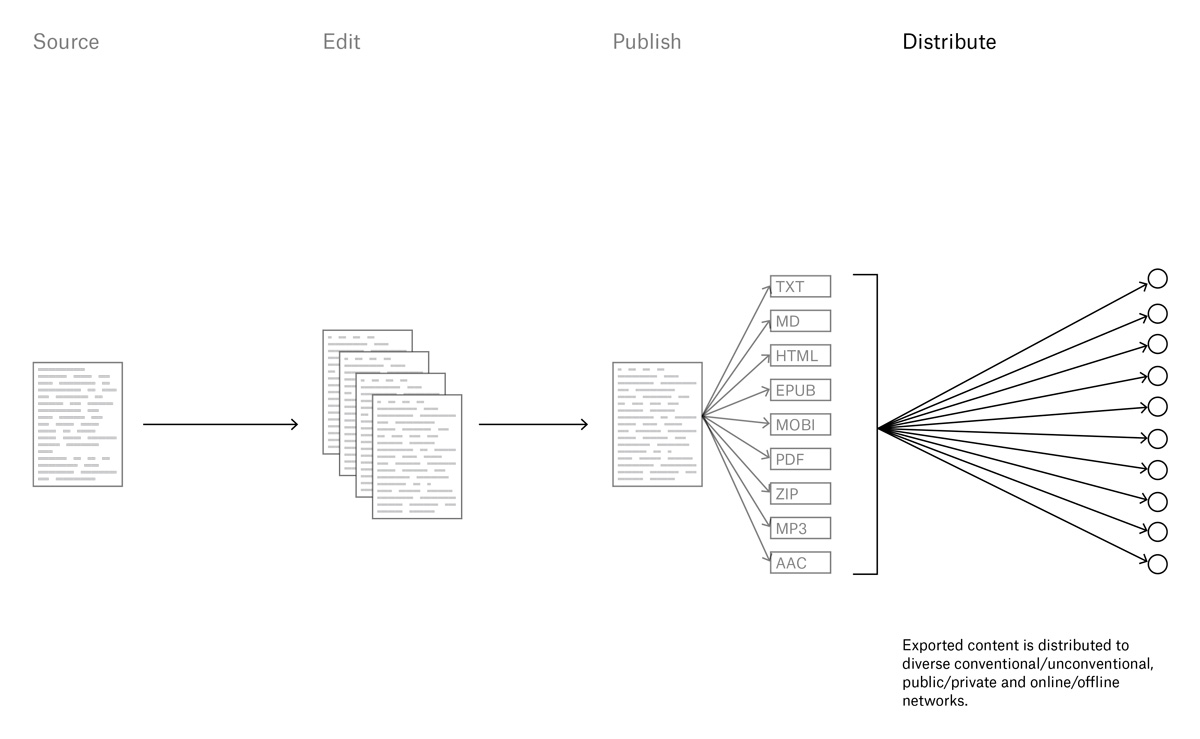 We wanted to apply a digital mindset to their publishing efforts, approaching it as a permanently unfinished, always evolving process, and collapsing the time and distance between author, editor, publisher and reader. Digital media allows us to separate content from form: content can be kept liquid and open for as long as possible, with form applied only as needed to distribute the content on different platforms. Approached in this way, publishing becomes an open network that invites collaboration and conversation.

We thought about what publishing means in an Iranian context, looking for ways that we could leverage digital and peer-to-peer networks to circumvent some of the issues they had with distribution. We came up with the idea of an automated publishing system where authors could contribute and revise articles directly via email. Past versions of each article remain available online, while users could collect single articles into their own custom publications, and download them as PDFs.

The second project, which I also worked on at LUST, was for the Sandberg Instituut in Amsterdam.

We approached this project thinking about the Sandberg as an archive that is constantly being shaped by its participants. We wanted to apply this concept to the smallest possible element: a typeface. We worked with Atelier Carvalho Bernau on a parametric typeface skeleton and built a generator that allowed students and staff to generate custom iterations of the Sandberg typeface. 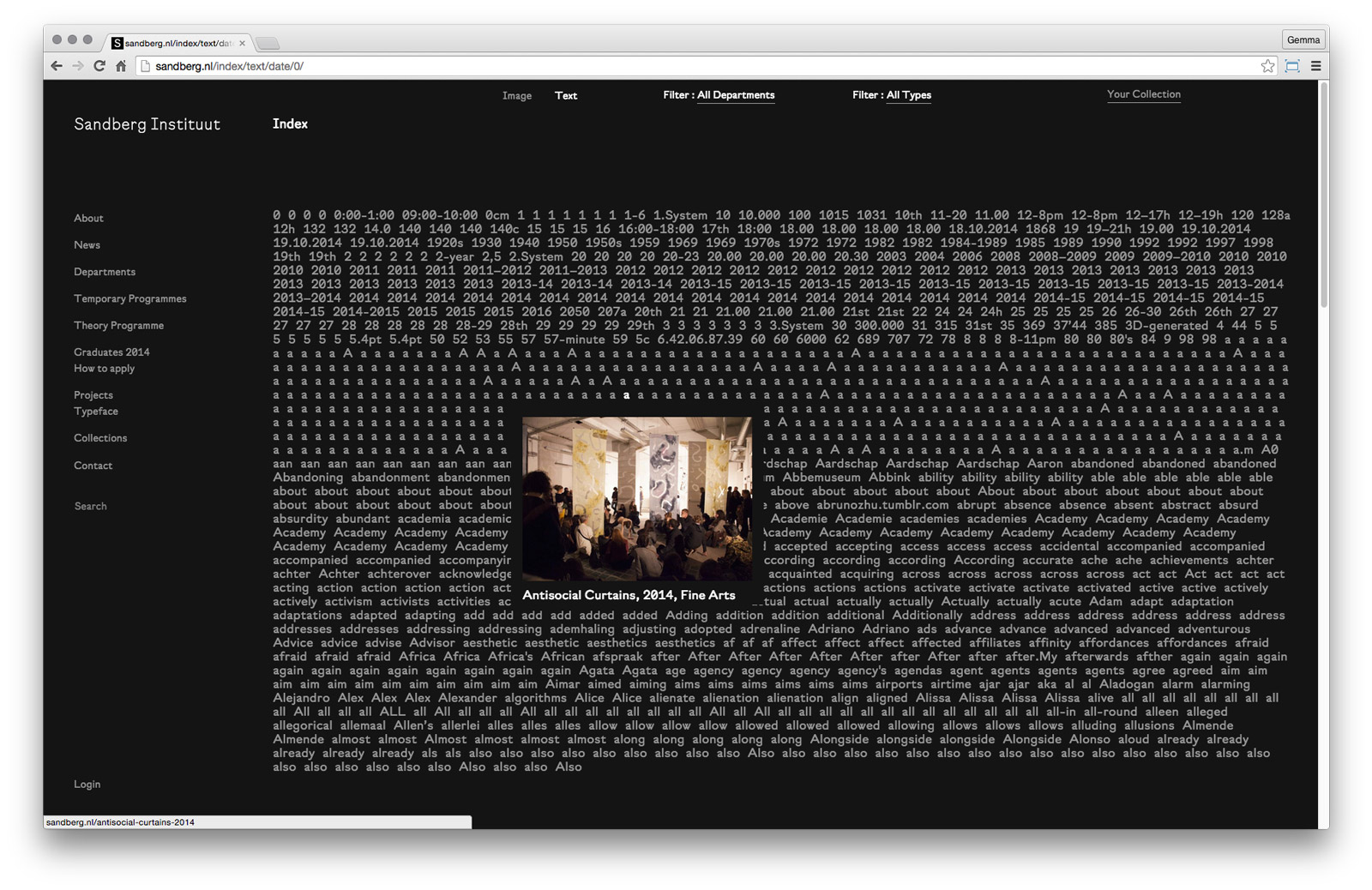 The homepage shows a continuously updating stream of every word and every image in the archive, linked back to its original page. 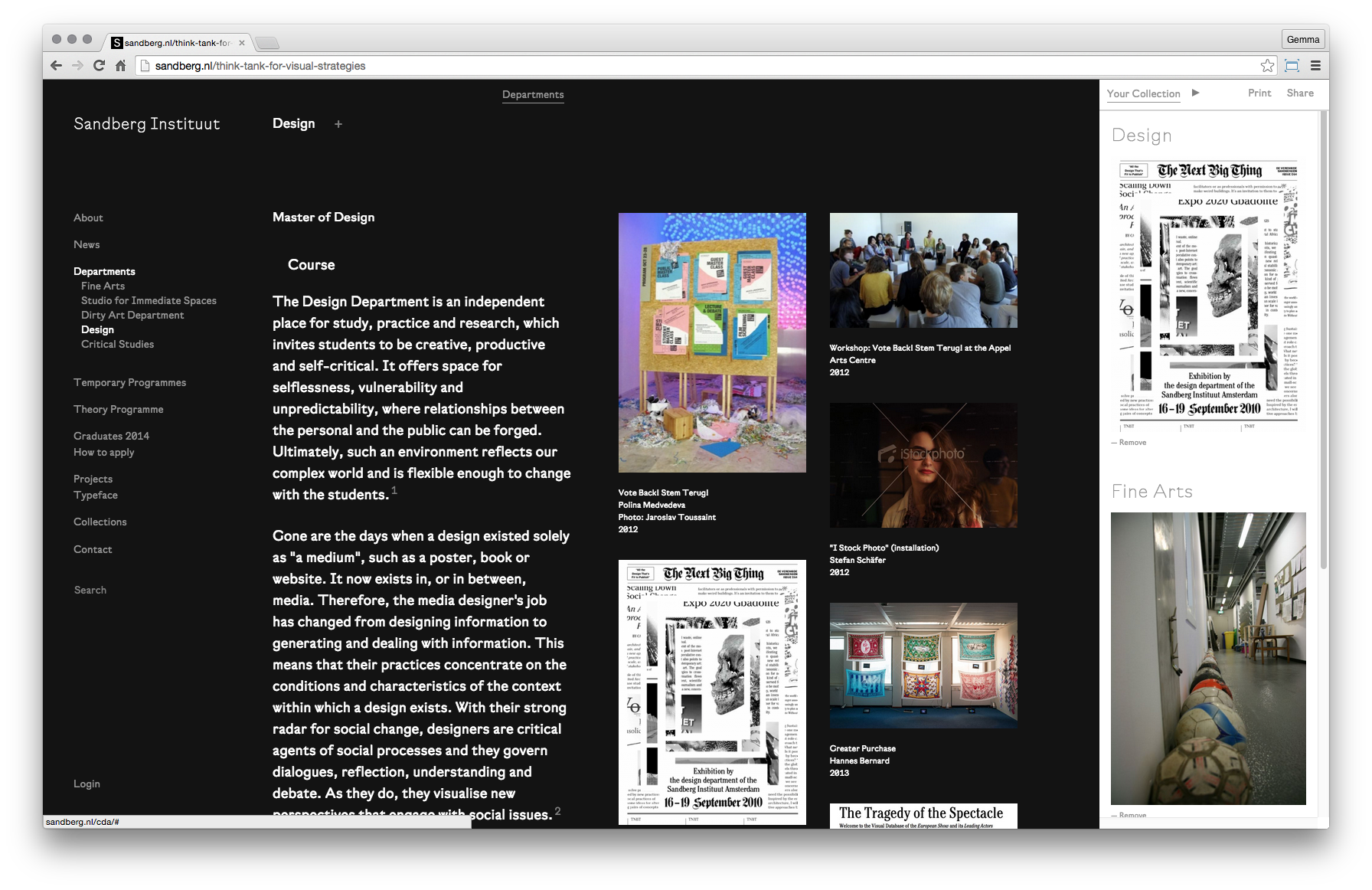 Visitors can add any element of the site – paragraph, image or page – into a custom collection, which can either be viewed as a presentation or exported to PDF.

The final archive was a project I worked on last summer, as part of a residency with La Foresta in northern Italy.

La Foresta is located inside the local train station, one of the main places in Rovereto where there is an atmosphere of internationality and diversity, with many different social groups traversing the space as part of their everyday lives. It’s a transitory space, a portal connecting Rovereto and the wider world.

I wanted to create a digital equivalent of this physical space – an archive of common resources and a platform for community interaction and collaboration. I was interested in setting up a platform for community collaboration that wasn’t dependent upon or tracked by commercial platforms, and finding out how a small-scale, private network might influence how people interact with each other.

I set up a local network using the excellent Mazi project as a starting point. Anyone within the vicinity can connect to the network via WiFi, and use it to securely add messages, share files, edit documents and chat to others nearby. The network is local and offline-first, meaning it’s only accessible when you’re in the train station itself. 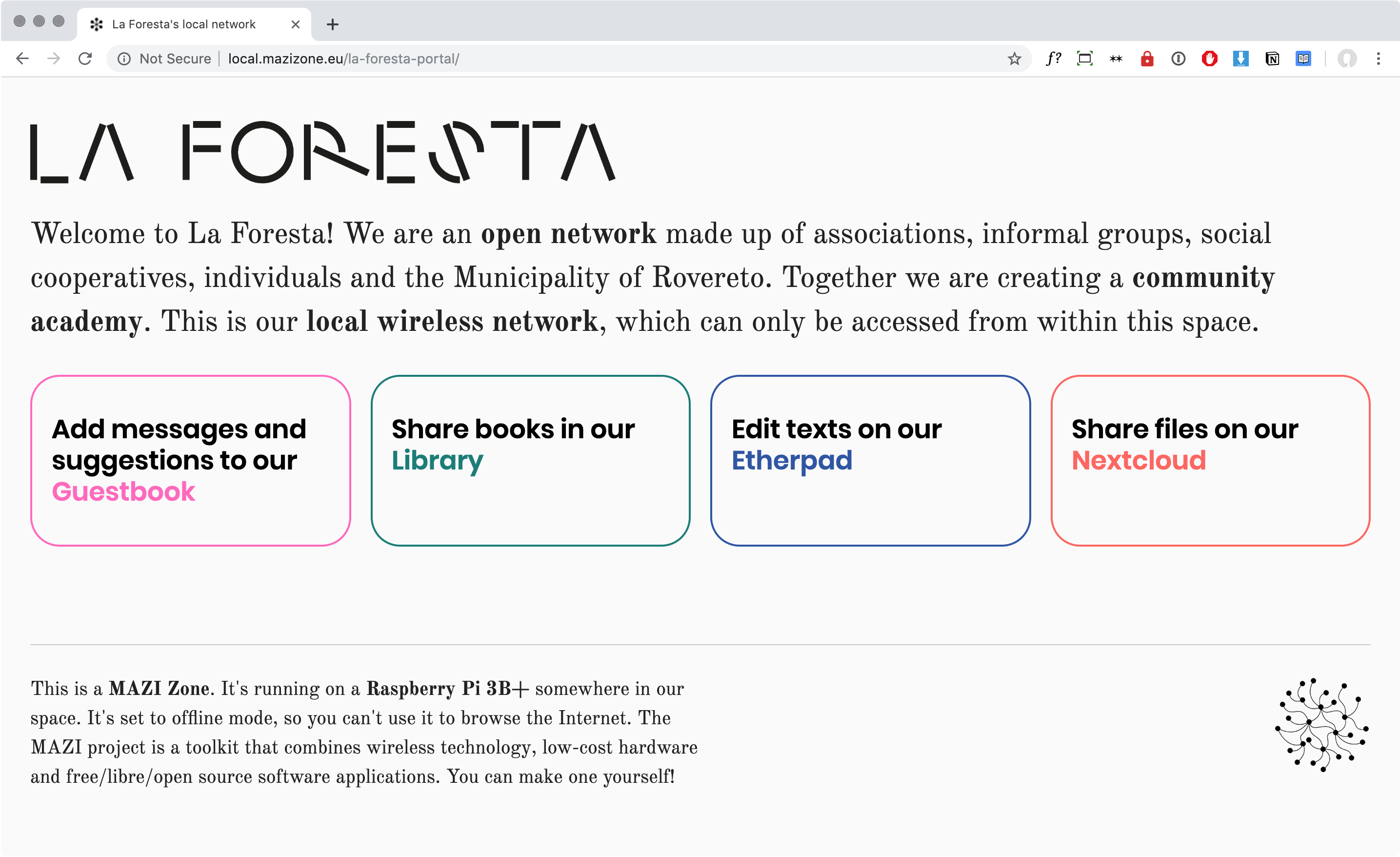 I hoped that using something as well-documented and user-friendly as Mazi (with some extra La Foresta-specific documentation added by me) would also make it easy for anyone to contribute and, with a sufficient amount of interest, also to be able to add or modify the network themselves.